How do you stop a picker? 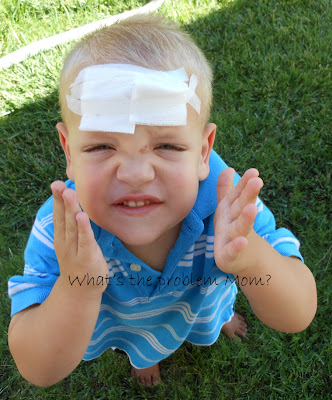 Okay - the problem is, this kid won't stop picking scabs. Now he's started making scabs because I cover up the ones he just made, it makes me crazy of course! Any remedies that have worked for any of you out there in blog land? 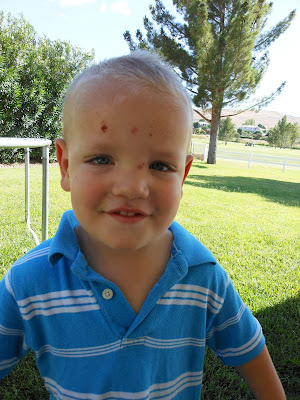 Here he is without the bandage - the picture below will tell you more about each scar. 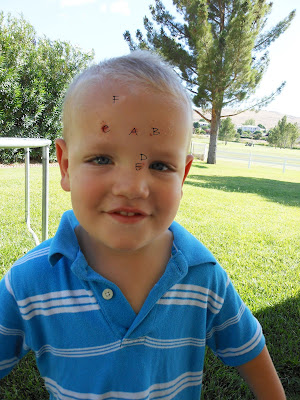 A - started out as a very small scar. Okay let's say - more like a scrape - got it from his older brother throwing a car at him.
B - BandAid Rash - I had to keep him from picking A!
C - Other side of BandAid Rash - but now a full fledge picked on scab - that's why I had the gauze on him, to stop him from attaching this new scab and also A.
D - Small scar - not sure how he got it, but I can usually blame his older brother.
E - Couldn't get to A,B, or C so he started a new one! That happened last night.
F - Huge scar from last November - it took over a month to heal from the "band aid, don't touch, band aid, don't touch" routine.

Really - I am at my wits end - I have tried everything, but he does this at night when he is supposed to be sleeping.

This is only a phase right? He'll get over it I hope - but probably not before he totally ruins his cute little noggin.
August 04, 2011 by Judi
Older Post / Newer Post